Skip to content
In our megadigest we talk about the intricacies of working in the audio industry, tell the story of unusual musical instruments, plus remember the tales and radio plays of the Soviet Union.

Money, career and that’s it

“I want music, but I don’t want all this”: we make our way to the radio. It is never too late to change your life, but it is better to know some nuances in advance. We tell you how to get on the radio. The algorithm of actions is as follows: record a good “demo”, go through an interview, be ready to learn a lot. Bonus advice for those who are already undergoing an internship somewhere: go to the corporate parties of your radio station – you never know which one of the management will manage to get to know.

How to start working in the music industry if you want to become a DJ or performer. Continuation of the previous material – this time we analyze the features of the work of novice musicians. Why don’t you try to get into an already “ready-made” group, when to update your music library and what tools will help you get comfortable with the DJ console and “turntables”.

What you need to know before you start a career in the audio industry. Our material is about the competencies that a DJ, a radio host, and a sound engineer who want to get into the game or film industry should have. In addition, we’ll talk about the work of “noise producers” – specialists who record separate and composite sounds for voice acting of films and series. Often, for the formation of full-fledged images and the "revitalization" of technological elements (such as the opening doors of the Enterprise bridge), they have to achieve a completely new sound that can not be so easily taken and found anywhere with a microphone in hand.

Shine and poverty: how the digital revolution made musicians poorer. Albums are the core of the 20th century music industry. In 1960-1980, the proceeds from their sale could exceed the earnings from the tour of the average music group by half. But that all changed with the advent of streaming services. They dealt a serious blow to the value of physical media and violated the plans of aspiring musicians for any serious earnings, familiar to this industry.

Shine and poverty: how to make a living if you are a musician. Over the first decade of the 21st century, revenue from music sales fell by half. In the article, we are talking about alternative sources of income for performers: from merchandise and side projects to combining creativity with ordinary work. We will also explain why touring is a non-profitable activity contrary to the expectations of beginners.

As a Pay model, what you want showed itself in music. The pay what you want model implies that artists sell their album or track at no fixed price. In general, the approach has proved itself ambiguous. Talk about the experiences of bands like Nine Inch Nails and Radiohead.

Musical instruments that did not become mainstream. This is our historical overview of such tools as theremin, omnichord and hang: how they work, why they have not gained popularity and where to find them today. In the second part, we are talking about niche instruments of the X – XIV centuries: wheel lyre, harp, cajon and saw – now they are used by ethnic groups and performers.

The most unusual musical instruments. Historical background on the unique keyboards and the people who played them. In the article: the progenitor of synthesizers is the Hammond organ, the fully-functional synclavier music studio and the Vako Orchestron optical organ. For each of them, we found a video recording of the sound.

Yellow carrot bend: 8 unusual musical instruments. A selection of bands and performers playing musical instruments from “improvised materials”: ​​a seashell instead of a trombone, vegetable flutes and a tennis racket guitar. The article has a lot of videos.

Haken Continuum: an electronic instrument with acoustic responsiveness. We tell the story of Continuum, in which the nature and nuances of sound production are completely dependent on the performer. We understand how the instrument was invented and why a whole community was formed around it. By the way, it is used today – composer Derek Duke wrote on the “Continuum” soundtracks for Diablo III and World of Warcraft.

Trautonium: the German wave in the history of synthesizers. Trautonium appeared in the 20th century – between the two world wars. The tool could not go beyond the narrow circle of enthusiasts, but still left its mark in world culture. We are talking about the structure and history of Trautonium, which was used by Richard Strauss and Oscar Sala.

History of audio technology: synthesizers and samplers. We are talking about devices that helped 20th century composers experiment with sound. We recall the various optical instruments of 1920-1930, electromechanical synthesizers and samplers, which are still popular with modern musicians. In particular, we will talk about Nivoton by Nikolai Voinov, Vibroexponator Boris Yankovsky and a sampler for home music production Optigan.

Eight Seconds of Sound: The History of the Mellotron. This instrument for progressive rock was used by both musicians of the nineties (Oasis, Red Hot Chili Peppers) and modern pop artists (Daido, Nelly Furtado). But his story began much earlier – back in the mid-twentieth century. In the material we tell why composers fell in love with him.

Vinyl is back and he's different. Records are again gaining popularity among music lovers and collectors. Vinyl is not just coming back, new technologies are emerging in this area, such as HD vinyl. We analyze the reasons for the "renaissance" of the retroformat and other nuances.

Flexible records are back from the past. The road into the hands of enthusiasts finds not only vinyl, but also flexible records. For example, in 2017, the Australian rock band Tame Impala released an album on them. We invite you to learn about the history of this medium – for which he was loved in the world and the USSR.

Tales in the USSR: the history of "children's" vinyl. The era of children's audio performances began in the middle of the last century, and Soviet actors and musicians were attracted for recording. Recall famous musicals and fairy tales on records. For example, we talk about the fate of "Alice in Wonderland."

Radio plays: very well forgotten old. The genre of a radio show originated in the thirties, but even today, radio dramas continue to appear on the air of Russian and western stations. We are discussing popular audio plays of the last century: “War of the Worlds”, “Archer”, “Doctor Who”.

What else do we have in the blog on Habré – “Show as planned”: can technological solutions interfere with the disclosure of the director’s intention 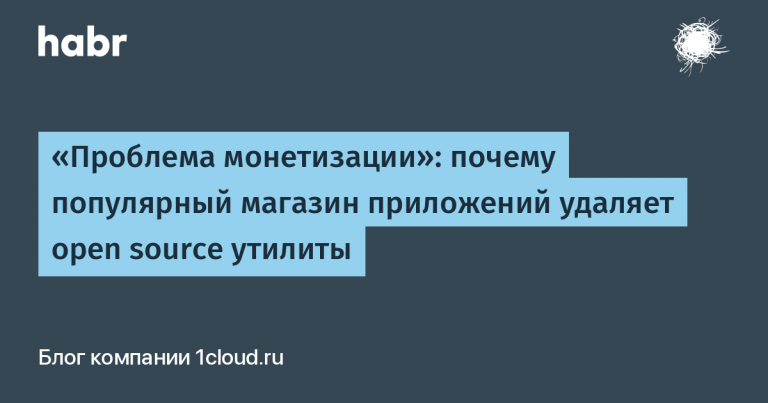